The Game never Stops, the entire Footballing World may be gripped with the greatest footballing fiesta officially beginning from today but the Premier League fixtures for the new season have also been released by the FA.[spacer height=”30px”]

Arsenal new manager Unai Emery is all set for a baptism on fire with his first competitive match in charge of the gunners coming up against the depending champions Manchester City at home followed by an away clash to Stamford Bridge on the second Premier League Match day. Quite an interesting start of Premier League fixtures for the gunners.[spacer height=”30px”] 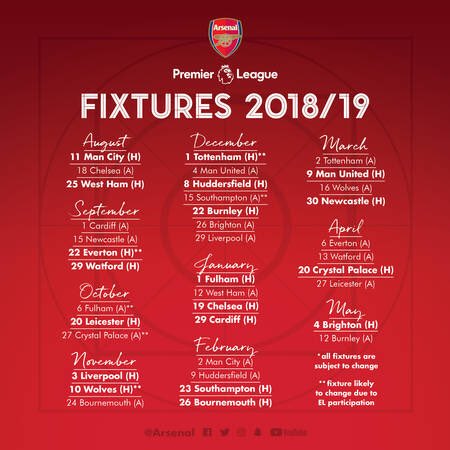 vs. Manchester City (H), Aug. 11, 2018: Unai Emery’s first game in charge starts with a litmus test against the defending champions and the almost invincibles (haha)  of last season. Well the manager and his new look team with new players will need to stay strong and start tough against the biggest of the big boys. [spacer height=”30px”]

vs. Chelsea (A), Aug. 18, 2018: Arsenal’s brutal start continues as they go to Stamford Bridge in the second week. Rocky shores ahead for sure but once again a quick chance to garner some early momentum with a morale lifting win against old foes. [spacer height=”30px”]

vs. Tottenham (H), Dec. 1, 2018: Emery’s first North London Derby — Can Unai Emery continue the famous Arsene Wenger domination over tottenham hotspurs or will his first season end up looking like the last couple of seasons under Arsene Wenger. [spacer height=”30px”]

vs. Manchester United (A), Dec. 4, 2018: The trip to Old Trafford comes in midweek, just days after the NLD — a very crucial juncture into the season this stretch of key matches. Winning ain’t easy at Old Trafford but its what brings the greatest pleasure, a win over jose certainly brings me a good nights sleep with the image of Jose at full time blessing me in my sleep.  [spacer height=”30px”]

vs. Manchester United (H), March 9, 2019: This game is wedged in between the start of the Europa League knockout rounds, once again a hugely important one in the Premier League Fixtures because losing to Man United at home is never okay unless you wanna get started with #EmeryOut. [spacer height=”30px”]

All eyes will be on a tough start for Arsene Wenger’s successor Unai Emery and here is what his reaction to the Premier League fixtures for Arsenal being released. [spacer height=”30px”]

Thank you so much. A really exciting start for us @Arsenal ! https://t.co/UGRqgJOodW

Confirmed : FIFA World Cup Group A | Egypt vs Uruguay key players to watch out for and Starting XI

Soham De
Writer who specializes in overcoming the yearly heartbreak of being an Arsenal supporter. Tries to make life better by venting out thoughts, writings about anything and everythings thats exciting about Arsenal FC.
Always up for debates and discussions but only about Arsenal

Soham De
Writer who specializes in overcoming the yearly heartbreak of being an Arsenal supporter. Tries to make life better by venting out thoughts, writings about anything and everythings thats exciting about Arsenal FC. Always up for debates and discussions but only about Arsenal
https://arsedevils.com