Skip to content
You are here
Home > Arsenal > Deal Agreed : Arsenal on the verge of landing Lucas Torreira | Arsenal paying more than the Release Clause

It seems like Arsenal’s new head coach and power trio behind the scenes at the Emirates are not messing around here![spacer height=”30px”]

The Gunners are in contention for a huge signing in the name Lucas Torreira.[spacer height=”30px”]

But who is Torreira?[spacer height=”30px”]

The 22 year old is a combative defensive midfielder who plays currently for Sampdoria. He has over 70 apps for the club and 4 goals to his name. He has even played once for the national team, and has just turned 22 in February.[spacer height=”30px”] 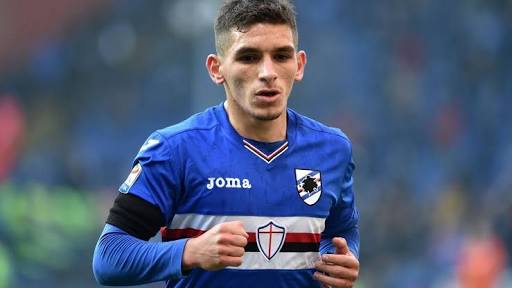 Napoli are also chasing the Uruguay International, but according to recent reports, it seems that Torreira will be heading to the Emirates in the summer with Napoli having backed off and the player himself favoring a move to England.[spacer height=”30px”]

Arsenal are close to an agreement with Sampdoria over the transfer of Lucas Torreira & are willing to pay €30m for the Uruguayan midfielder, more than his €25m release clause, but want to pay the larger fee over a number of years. [@DiMarzio] #afc pic.twitter.com/Y63lXZZ5dH

His control over the ball, passing range, and eye for goal is what makes him an asset.[spacer height=”30px”]

Earlier this week, the ever reliable Di Marzio broke the news which sent the Arsenal fans in frenzy! The player has a release clause of 25 million euros and Arsenal are not taken back by it considering the fact he is very young and could shine under Emery.[spacer height=”30px”]

[spacer height=”30px”]Now according to the latest update provided by Di Marzio, Arsenal heirarchy have indeed reached an agreement with the club where in they will reportedly pay more than the release clause of the player in order to seal the deal however there is a catch.[spacer height=”30px”]

Given the desperately low budget that we have this season, Arsenal are hoping to pull this off by paying in installments over the course of the next few seasons and this is apparently something which the Italian club approves of and the only obstacle now being the agent fees of reported 3 Mil Euros.[spacer height=”30px”]

According to Di Marzio, a very trusted a reliable journalist, Arsenal have sealed the deal for highly rated midfielder Lucas Torreira. Only agent fees are left but are said to not be a problem.

How do you feel about this, let me know below. pic.twitter.com/CBS5hS9BRk

[spacer height=”30px”]It is reported that Napoli were also willing to match the amount, but pulled out of the deal as they were unable to strike an agreement with Torreira and because the player himself desired a move to England instead of Naples.[spacer height=”30px”]

And following Sampdoria’s signing of Lovro Majer, the departure of Lucas is certain.[spacer height=”30px”]

Arsenal, as we all know have lacked steel and solidity in the middle of the park since the days of Patrick. Granit Xhaka provided some much needed physicality in midfield alongside Aaron Ramsey, but he wasn’t consistent and his errors led to goals at multiple occasions.[spacer height=”30px”]

Breaking News : Why Unai Emery’s PSG link lands French Midfielder as Arsenal seem to have uncovered an absolute Gem as their Second Signing of the Summer

Should this deal go through, the Gunners will have plenty of options in midfield, and a proper competition for Granit Xhaka for partnering the ever present Aaron Ramsey.[spacer height=”30px”]

There are also whispers of Aaron Ramsey extending his contract at Arsenal and just the official announcement is pending in regard to the Sokratis deal.[spacer height=”30px”]

It looks as if Arsenal have sorted their Defense and Midfield department, but they still need a goalkeeper and a winger to challenge at the top. While it is a matter of when and not if, in the Torreira deal, I’m sure the Arsenal officials are gearing up for the Big Oblak deal at the end of the window![spacer height=”30px”]